St. Andrew's Church, Grimsby, was the scene of a pretty Maytime wedding on Saturday, when Eva Isabel, elder daughter of Mr. and Mrs. H. Tyndale Haws, was united in marriage to Mr. Leroy Kenneth Durham, only son of Mr. and the late Mrs. E. B. Durham, Smithville. Rev. J. Allan Ballard officiated, and the organist, Mr. G. Burgoin, was at the organ. The sanctuary and chancel were banked with palms, hydrangeas and urns of spring flowers.

Given in marriage by her father, the bride looked charming in a gown of Ivory Duchess Satin, made on Princess lines and extending in a short train, with tiny satin covered buttons reaching from the Queen Anne collar at the back to the waistline. She wore her grandmother's wedding veil of embroidered Brussels net, arranged over her dark hair from a heart-shaped coronet of pleated tulle and orange blossoms, and extending beyond her train. Her shower bouquet was of Talisman roses and baby's breath.

The maid of honour, Miss Alice Haws, only sister of the bride, wore a becoming gown of forget-me-not blue net over taffeta, fashioned in redingote style. Her matching halo was made in coronet style, from which fell a shoulder veil of blue tulle. She carried Johanna Hill roses and sweet peas. Mr. Henry Haws, brother of the bride, was best man.

A reception was held at Rossmore, where palms and spring flowers decorated the spacious rooms. Mrs. Haws received the 30 guests wearing a gown of grey silk crepe with matching accessories. Sweet peas and forget-me-nots composed her corsage bouquet. She was assisted by Mrs. Durham wearing a frock of Ashes of Roses silk crepe with matching hat and her flowers were sweet peas and lily-of-the-valley. Mrs. Elizabeth Durham, grandmother of the bridegroom, in a black and white crepe frock with matching accessories and wearing a corsage of Talisman roses, also assisted in receiving.

The bride and groom left later on a motor trip to Gananoque and the Eastern States, the bride travelling in a beige reefer coat over an olive green handknitted suit, with brown accessories, and corsage of roses from her bouquet. 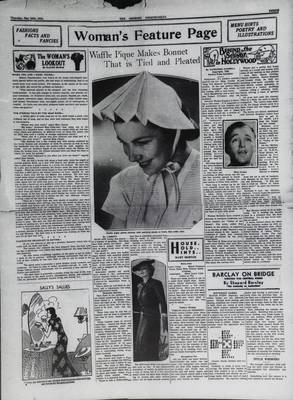