The Germans themselves believe they are going to lose the war, and soon, declared Pte. Carl Juhlke, 26, former Beamsville boy, who arrived Saturday, the first Niagara District boy to return home from this war's prison camps. A member of the Royal Hamilton Light Infantry, he was taken prisoner at Dieppe, where his brother, Pte. William Juhlke, was killed.

"I didn't get a chance to talk to German civilians", Carl told reporters Sunday as he stretched his right leg, wounded by mortar and machine gun fire in front of the Casino at Dieppe. "But I talked a lot to the guards at our prison hospital. They were all German soldiers who had fought on the Russian front and had been wounded. They were brought back as guards at prison camps. They all said that they thought the end of the war would come any time, with Germany on the losing end."

Juhlke had been in a German prison hospital, Stalag 8B, near the Polish border for the past 14 months. The food was not bad, he said, but this was attributed solely to the parcels received from the Canadian Red Cross Society.

"We'd all have starved to death if it hadn't been for the Red Cross," he said. "There were about 800 of us there, and we pooled all our food. Some of the boys who could, volunteered to do the cooking, and we all got along fine. The Germans gave us bread, but we wouldn't eat it. It was hard and black, and we decided it was made of potatoes and sawdust. If you cut it, you could sweep the sawdust off with your hands. The Germans gave the prisoners meat - horsemeat. Horsemeat isn't at all bad, but it's a little stringy," he said. "The Germans are supposed to be able to make good sauerkraut, but the stuff we got wasn't as good as Canadians make.

"The Germans used to give us "fish cheese", and if you think Limburger smells, you should smell that. The boys would put it in the toes of the other fellow's shoes. We never ate it."

Pte. Juhlke was born and raised at Beamsville. He is the son of Mrs. Daisy Juhlke and the late Ernest Juhlke, who was chief of police at Beamsville until his death a few years ago. His mother now lives at Niagara-on-the-Lake.

Dieppe was "a hell on earth", he said. He was handling a mortar, and got just past the sands of the beach on that historic 19th of August, 1942. An hour after he waded ashore he was wounded in the right thigh with shrapnel from German mortars. He must have also have been hit by a machine gun, he said, for they removed a bullet from almost the same part of his leg.

He was only able to crawl around after he was wounded, he related. Every time he moved "the Germans threw a lot of stuff at me." When the order was passed up to the front to withdraw to the landing barges, he said, the Canadians "ran out like deer instead of waiting their chance. That was where a lot of them got it."

He was taken to a prison hospital in France for a month. German doctors treated his wound, but they had little equipment, he stated. While he was there, British planes came over and shot down a Nazi fighter plane. The French all cheered, and the Germans immediately cut the meat ration of the French. After a month in this hospital he was moved to the eastern part of Germany to a regular prison hospital, and there British doctors who had been taken prisoner gave the patients the best of care.

A Dr. Robertson, of Toronto, was planning to operate on Juhlke's leg when rumours started to fly that some of the men were to be repatriated. The operation was postponed several times as the rumour grew stronger, and finally the order came that the men were to be moved to a regular prison camp. They packed up and were brought home. A number of the men who thought several months ago that they were about to be repatriated were so disappointed when they found that plans had fallen through, that they became mental cases, said Juhlke.

The poor medical treatment he received from the German doctors in the first hospital left his leg and ligaments stiff, Juhlke said. He walked with crutches throughout his imprisonment, but when he heard he was coming home, he threw them in a corner and left them there. He uses a cane occasionally now, but can get along quite well without it.

"The Germans only let those go who they thought would not be able to be fixed up enough to get back into the fight," he said.

They boarded a train and went through Poland to the Baltic Sea, across to Sweden, and then entrained for a trip across Sweden to three boats waiting to take them to Britain. "The Germans provided escorts and it was a good thing they did, because those waters were full of mines. I saw them all over the place," he said.

As the train went though Poland, conditions seemed terrible, he said. Whenever the train would stop, the men would look for some young girl, and would throw her food from Red Cross parcels that had been distributed on the train to every man.

"As soon as the food would land, there would be a mad scramble. Women appeared from all over the place and fought and kicked and scratched to get it. Some women even got down on their knees beside the train and begged us for food," he said.

Pte. Kuhlke lost a lot of weight while he was a prison, but he still appears husky.

When he arrived in England he visited the grave of his brother, Pte. William Juhlke, former Peach Bud hockey player. His brother had gone through the actual fighting at Dieppe unscathed. He had swum to a landing barge three quarters of a mile out, helping a chum, Pte. John Mongomery, of Beamsville, who had been wounded in the shoulder. Their barge was sunk, and they were transferred to a destroyer. A gunner was knocked out by shrapnel from the dive bombers and William Juhlke, who had some training with the guns, volunteered to man it. He was exposed and was shot in the abdomen. He had no pain and seemed to be recovering, but infection set in and he died in England. 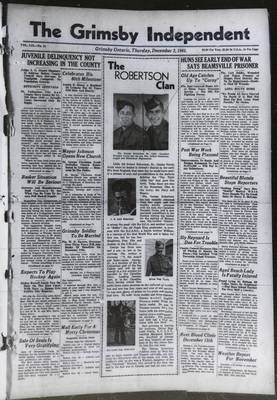