One of the most impressive wedding ceremonies which has ever taken place here was that of Miss Honor A.C.Gosling and Mr. Gordon Burland, son of Mr. and Mrs. A.C. Burland, of Grimsby, Ontario, which was solemnized in St. Paul's, Paget, yesterday morning in the presence of a very large congregation consisting of members of both families.

The church was decorated with excellent taste and conveyed a beautiful picture to those entering from the brilliant sunshine without. Near the west door was a large arch composed of Easter lilies and fern.

The altar was also a mass of Easter lilies and formed a beautiful background for the bridal party as seen from the west end of the church.

There was a constant succession of arriving guests for three-quarters of an hour before the beginning of the service, and by 11 o'clock every seat was occupied.

A short recital was given on the organ by Mr. E. Holman, the organist, during the time the congregation was assembling, which merged into the singing of the hymn, "Lead us, Heavenly Father, Lead us", as the procession of Clergy entered, to be closely followed by that of the bride.

The bridegroom with his best man, Mr. Frank Gosling, cousin of the bride, was already at the altar steps. A gardenia, the first one ever grown at Government House, was most kindly sent by His Excellency the Governor to the bridegroom for a button hole and handed to him by the bridesmaids.

The procession was formed by the Crucifer, Colonel D. Mackenzie, the Rector of Paget, the Rev. G.B.Cooley, the Rev. Dr. F. Reazor and the Rev. Marriott, Canon Residentiary of the Cathedral.

The bridesmaids, who were Miss Madeline Asser, Miss Elsie Gosling and Misses Betty and Prudence Appleby,carried bouquets of many shaded nasturtiums, which flower was also indicated in the coloring of the dresses of a charming delicate shade of green georgette with picture hat of cream straw, a spray of orange colored flowers on the right side. They made a charming group as they came through the arch of lilies followed by the bride on her father's arm, in her dress of white satin made with a slight train and covered by a veil of priceless lace, which was lent by Lady Asser and has been worn by her and her mother and grandmother. It was beautifully arranged under a wreath of orange blossom. As the bride stood at the altar surrounded by the bridesmaids it would be difficult to think of a more beautiful or picturesque wedding group.

The bride's bouquet was of white iris, rosebuds and carnations. Canon Marriott performed the marriage ceremony, the bride being given away by her father, Mr. E.H. Gosling. The responses of the bridal pair were distinctly audible all over the church.

At the Nuptial Mass the Rev. G.B. Cooley was the celebrant, assisted by the Rev. Dr. Reazor.

The three hymns selected for the service were: "Lead us Heavenly Father, Lead us", "O Perfect Love", and "How Welcome was the Call".

As the conclusion of the ceremony the bridal party proceeded to the vestry and, the usual formalities over, the procession came out of the church to the strains of Mendelssohn's "Wedding March".

A very large reception was held at "Highwood", the home of Mr. and Mrs. E.H. Gosling.

About 200 guests attended the reception at which the health of the happy pair was drunk and many good wishes received by them for their future happiness.

Mr. and Mrs. Gordon Burland left early in the afternoon for the honeymoon, the bride wearing a most becoming costume of grey.

They will in the near future reside in Canada and many good wishes from every section of the community will follow them. 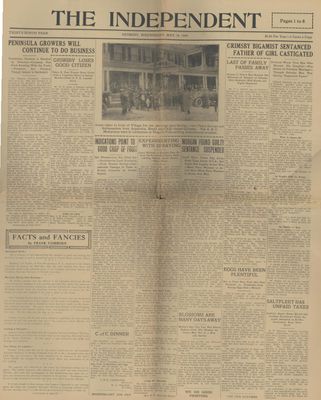