Lieut.-Col. Bingle retired from his post at Chatham in 1946 and returned to the insurance business.

He joined the Princess Pats in 1914 and served overseas with the unit. He became a captain at the Battle of the Somme in 1916.

Demobilized in 1919, he joined the Canadian Fusiliers in 1924 and became commander of the unit. In 1937 he relinquished his command. In 1941 he enlisted for active service and was company commander at No. 11 Basic Training Centre, Woodstock.

From Woodstock he was transferred to company commander at No. 12 B.T.C., Chatham, later becoming second-in-command.

Co. Bingle was born in Grimsby in 1886 and was educated there. His first military unit was the 7th Regiment, London, which he joined in 1901.

Col. Bingle was a Fellow of the Chartered Institute of Secretaries. He was a member of St. John the Evangelist Anglican Church.

He was the son of the late William Hamilton Bingle and Alice Bingle. Surviving are his wife, Marjorie Blandford Bingle; one son, William Hamilton Bingle, at the family home, 329 St. George Street; one daughter, Mrs. Charles (Joyce) Gibbons, Montreal; and four brothers, Roy A., of London; Thomas, of Brantford; Alfred, of Grimsby, and W. Burton, of Toronto. 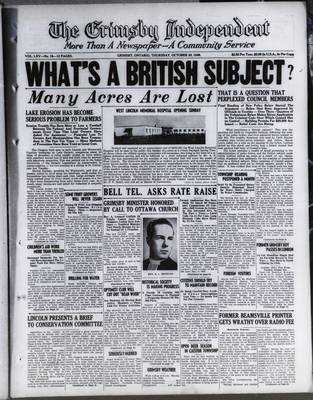