Mr. A.P. Henry of Mountain St., was indulging in one of his favorite hobbies as we came up to see him the other day, that is, sitting on his porch and watching the cars go by. Personally we can't think of a better way to spend a lazy summer afternoon unless in the garden chasing weeds and that would be quite all right with Mr. Henry, too, because his garden is one of his favorite pastimes.

Arthur P. Henry will, on August 14th, 1949, have passed his 90th milestone and he can still provide the Duke of Patton St. with lots of strong competition in the potato market, home grown, that is. He arrived in Grimsby from Binbrook in the year 1914 and took up residence at his present home on Mountain Street. The year after he arrived his wife passed on and since then Mr. Henry has lived alone with the services of a housekeeper. He worked on the fruit shipping platforms and in various other places until he was able to retire and attend his garden. It seems that, in Mr. Henry's opinion, the young bucks of today don't know when to quit sowing their wild oats.

Mr. Henry's son, Roy, is an engineer with Upper Canada Mines and a good one at that.

We asked for a picture to use along with this story but Mr. Henry steered away from the topic. We discussed the dry year this season and the fact that the drought had almost ruined the potato crop. We noted carefully that the corn had not had a chance to "ear-up" and then we brought up the subject of pictures again.

"Pictures," said Mr. Henry, "pictures. That's the whole trouble with the newspapers of today. They have too many pictures. Now I like to read news and information about government, business and crops and so on. But all there is now is pictures."

Well. Mr. Henry went to get us the picture in spite of all he had said. But we had to explain to him that we would be in trouble with our editor for not producing said picture before he at last consented to go in and dig one up. When he came back out he checked up on the health of his friend "Bones", and then a sparkle of humor came into he eye.

"Can you put a new hat on that picture," he asked, "I bought that one years ago one night in the dark and I couldn't see what I was getting."

We thanked him for the picture and started off down the street. Before we were out of earshot our friend called us back. "Say" he said, " do you know when my birthday is?" We assured him that we did. "Well, I'm 90 this August 14, and I just wouldn't want any overestimations." That's exactly right, Mr. Henry, and we don't want any overestimations either. Ninety this August 14, and fit as a fiddle. Congratulations! 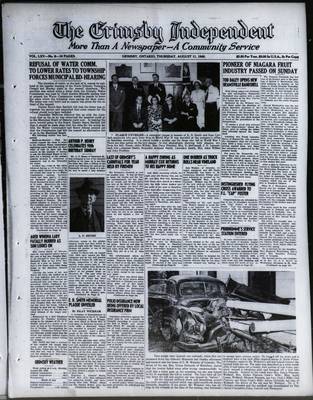