Note: The following article from The Dunnville Chronicle will be of much interest to a great many people in this district as Mme. Marie Harrison was a resident of Grimsby for a great number of years when her husband, the late C.W.Harrison, was Principal of the old Grimsby Grammar school when it was situated in the lower half of the old Town Hall then located at the corner of Depot and Adelaide streets where the Grimsby Public Library now stands. There are dozens of fully matured men and women in this district today who went to school to him and will well remember Mme. Harrison. Also the family will be well remembered through their son Charles who used to stage the once famous High School concerts and was a crack player on Grimsby hockey teams. - Ed.

Her voice has been stilled forever, and now nothing remains but the memory of her glorious achievements in those days when lovers of the best in music thrilled to its perfect interpretation by Madame Yulisse, both in the western Hemisphere and in Europe. A Dunnville, girl, Mme. Yulisse was a world-famous figure in the height of her successes, and older folks still remember when she thrilled her audiences with her marvelous range and her unaffected manner in those songs that called for the utmost in skill for their presentation. Mme. Yulisse is dead, but her achievements and the memory of her voice can never die.

Mary Julia Smith was born in Dunnville, a daughter of the late John and Mrs. Smith, on June 13th, 1862. Her father was a druggist, and early in her life her parents noted her voice held outstanding qualities. Even while she was receiving her earlier education here, she was also studying voice, and there was no doubt in the minds of her family and friends that Mary had a future.

Part of this future she took into her own hands, however, and in July, 1879, when only 17 years of age, she was married. Her husband, Charles W. Harrison, was Principal of the Dunnville High School at the time and he insisted that she continue with her studies under the best voice teachers. After a few years they left Dunnville for Hamilton, but returned from 1886 to 1890, only to move again, this time to Sackville, N.S.

Meanwhile, Mrs. Harrison was studying in Boston and New York until her teachers there felt that they had done all that they could, and urged her to go to France, which she did in 1897, studying under Mme. Marchesi, who also had trained Mme. Melba. Here, however, was a student who showed surprising qualities. Her range covered a full 4 octaves, and she could reach, with ease and with a purity of tone, notes beyond the reach of all but the most rare of sopranos. In short here was a voice that was to thrill the world.

At the turn of the century, Mme. Yulisse, as she now was billed, was taking part in the famous Covent Garden opera in London, England, between tours which saw her on concert platforms all over the world. In America she was a stellar attraction with the Arthur Godfrey band of New York City, and toured Canada and the United States with this famous band. There were many other tours and concert engagements, the records of which are not readily available, but hers was a nature that would not permit her to say "no" to any request. She sang for the sheer love of singing, and if her efforts afforded pleasure to anyone, she simply could not refuse.

Others benefited from her own experience in her younger days,when she was, for some years, choir leader in the Centenary United Church, Hamilton. She appeared many times in Dunnville, her services always offered freely in her home town, and some of the younger people even, can still remember her singing - she still enjoyed a lovely voice even when the years had passed that would normally rob the average singer of his or her talents.

Mme. Yulisse appeared in British Columbia in 1906, at a Provincial festival, and her picture appeared on the program with the following description; World's Highest Soprano of Queen's Hall Symphony, Royal Albert Hall, Crystal Palace, St. James Hall Concerts and Prima Donna of Grand Opera, London, England. The program went on to say: "We had never hoped that we would be able to present such an attraction as this greatest of all Canadian singers who has won such distinction in the musical circles of the world, an who has been ranked as an equal to Melba or Patti. She excels all in the marvellous range of her voice, extending over 4 octaves."

The funeral was held last Thursday afternoon, February 17th, from the Clark and Hasler Funeral Home to Dunnville Riverside Cemetery for interment. The services were conducted by Rev. F.H. Wase of St. Paul's Anglican Church and the pall bearers were Dr. R.D.Blott, E.C. Ralph, Fred Blackwell, Dr. Parry Harrison, R.W.Smith and F.R. Hickey. The floral tributes were beautiful and mute indication of the very high esteem enjoyed by Mrs. Harrison. 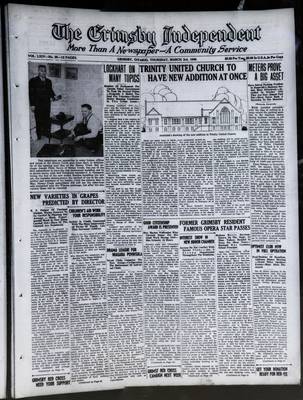