Less than a month after he was honoured for a life-time of devoted medical service in a sprawling district stretching from Jordan to Grimsby, Dr. A.H. Addy died Saturday morning in St. Joseph's Hospital. He was in his 80th year.

It was on January 18 that Dr. Addy was to be honoured in person by his friends, patients and upwards of 3,000 babies he had brought into the world.

For weeks, the secret of the presentation was kept from him. He was to be surprised when a cheque to endow a children's hospital ward in West Lincoln Memorial Hospital was to be presented to him. Sufficient funds were raised to endow the ward in perpetuity in the kindly doctor's honour.

But it was on January 18 that Dr. Addy was stricken at his home with a heart attack. Even so, only strictest orders of his personal physician prevented him from appearing that evening at the new Jordan school.

That night, deep down in their hearts, hundreds of his friends who attended the ceremony must have realized the doctor was nearing the end of his life-time of practice. They didn't admit it, but they were concerned.

Dr. Addy was a typical country doctor. He was more than doctor - he was friend and advisor to his hundreds upon hundreds of patients.

His sense of humour, his love of birds and flowers, his kindly beneficence were noted far and wide.

The doctor spent more than 50 years in the service of others. At any time of day or night he might be seen answering emergency calls over an area of many square miles.

His horse and buggy in the early days of his practice took the doctor on just as many cases as did his automobile later.

Dr. Addy acted as his own dispenser - his dispensary was well equipped from the earliest days of his practice.

For 40 years he was medical officer of health for Louth Township, and it was he who was responsible for the disappearance of diphtheria in the township. There has not been a single case of the dread disease for 19 years.

Similarly the doctor had wiped out once prevalent typhoid, when he traced its source to dairy cattle owned by carriers of the disease.

Dr. Addy was born in Saltfleet Township and was educated at Waterdown Public School, Central Collegiate and the University of Toronto.

He practised in Binbrook and in Owen Sound for short periods, but the major part of his life had been spent in Jordan.

Surviving, in addition to his wife, is one son, Paul, of Montreal. 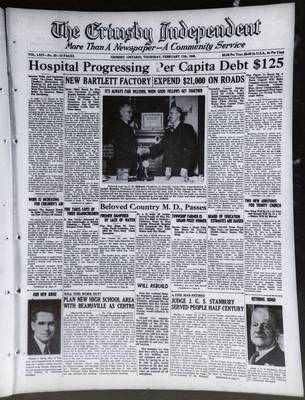