A long and useful life was ended last Friday evening with the death of Hon. E.D. Smith, 95, at his home, "Helderleigh", in Winona. One of the great pioneer builders of the Dominion of Canada, he was a member of the Canadian Senate for 32 years and was dean of the Upper House until he retired, owing to ill health, in 1946.

He was the founder of the firm of E.D.Smith and Sons, Limited, of Winona, a pioneer in the fruit-growing and marketing industry, and the originator of the pure fruit jam and jelly making industry in Canada.

In failing health for some time, he became critically ill several days ago.

Of United Empire Loyalist stock on both his mother's and father's side, Hon. Ernest Disraeli Smith was born in a log cabin in Saltfleet township on December 8, 1853, a son of the late Sylvester and Isabella D. (McGee) Smith. His grandfather, Silas Smith, one of three brothers, came to Canada... Revolutionary War, settled at the "Fifty", just east of Winona, and in 1802 received a deed of land for 200 acres at the "Fifty" and 400 acres on the Mountain.

It was Senator Smith's vision and enterprise as a young man that resulted in the fertile acres of the Niagara Peninsula being developed into the garden of Canada, and later founded the Canadian jam and jelly making industry.

His father was a grain farmer but this did not appeal to the youth who was later to become a Senator. His intention to become a civil engineer was frustrated by his eyesight becoming affected by overstudy. Sure he could make a success of fruit growing, he obtained a few trees, and with these and his unlimited enthusiasm as his entire stock-in-trade, he started in a small way in 1877. Not many years rolled by before his dream came true and he was producing high quality crops that attracted attention among his neighbours in the then sparsely settled district. The demand for fruit increased to such an extent that new orchards were set out and it was not long before the Niagara fruit belt was well on the way to being established as the garden of Canada which was to bring millions of dollars annually to those who followed his example.

He propagated new varieties of fruits and found ready sale for them. The name of E.D.Smith became known throughout Canada, and interest in fruit growing spread. So that others might have trees, he started a nursery in a small way in 1882. Like his fruit growing enterprise, it developed on a rapid scale until his products were making a name for themselves across the country and his holdings in the peninsula became extensive. Trees, shrubs, roses and perennials were grown along with fruit to an extent of almost 1,000 acres. Many of the original orchards in the Annapolis Valley of Nova Scotia, Brighton and Trenton districts of Ontario, as well as the Niagara Peninsula, originated in the E.D.Smith nurseries. Greenhouses were later added to furnish cut roses and tomatoes to the retail trade. In 1946, on the death of his son, Leon, who had been directing the nursery business for several years, the nursery business was discontinued, fruit farms and greenhouses being retained.

In the early days, solution of one problem seemed only to develop another, however, for when thousands of farmers started to grow fruit, and heavy crops went on the market, supply exceeded demand. The keen brain of the young Winona grower-nurseryman proved equal to the challenge, establishing a new system of distribution from grower to retail trade which temporarily solved the problem of disposing of excess crop.

Then, when the time came that existing markets could no longer absorb the greatly increased fruit crop, he decided he would make jams and jellies, something previously unheard of in a commercial way in Canada as all pure jam for the Canadian market was being imported from Great Britain. Very little attention was paid to the pure jam and jelly business when he first started it in 1904, but sale of his products laid the foundation of a great industry. Orders from far and near grew to such an extent that the business had to be enlarged repeatedly. Additional products such as grape juice, chili sauce, catsup, tomato paste, pie ingredients, maraschino cherries, etc. had been added until it has become the extensive Dominion-wide business now carried on by his son, Brigadier Armand Smith, and his grandsons, Llewellyn and Alastair.

It was to be expected that an alert mind so closely linked with the country's development would be equally interested in public affairs, and this explains why the late Senator Smith entered the political field. A staunch Conservative all his life, he was elected in 1900 to represent the riding of Wentworth in the House of Commons. After serving for 2 terms, he was honoured by appointment to the Senate on May 26, 1913. After 32 years of service in the Red Chamber, he retired from that body in 1946 at the age of 92 years, at which time he was the oldest member of the Senate both in age and years of service.

Mr. Smith was one of the few men who were keenly interested in the formation of the Women's Institute in 1897, and was an understanding help-mate to his capable wife when she became the first president of that organization which has grown to such proportions and become a real factor in the life of the rural women of the world.

A devout churchman, he was a member of St. John's Anglican Church, Winona, which he helped to build, and where he served as a warden for 31 years and gave his wholehearted support in every way.

On March 24, 1886, he married Christina A. Armstrong, daughter of Elijah Armstrong, of North York Township, who predeceased him in 1932. To their union were born a daughter and two sons - Mrs. Gordon Conant (Verna), of Oshawa; Brigadier Armand A. Smith, and Leon Smith.

Everyone who knew Senator Smith - and his friends were legion - had a deep and lasting regard for him. He radiated those qualities of life which made him known to all as a Christian gentleman. He enjoyed home life with his family and he found particular pleasure amidst the surroundings of his home.

With his business capacity, his love of work, his active interest in politics, his community and his country, it can be truly said that Hon. E.D.Smith was one of the great and sound pioneer builders of the Dominion of Canada. 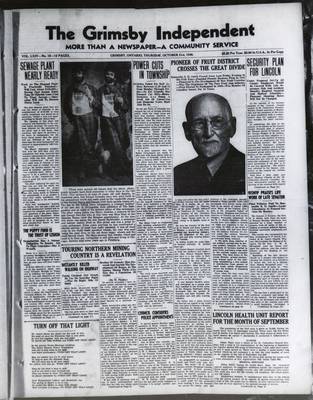