Little more than an hour after they heard a radio newscast Sunday evening telling of a woman being taken from her blast-shattered 13th floor apartment after an explosion had caused hundreds of tenants to flee from a 15-storey apartment in New York City's Peter Cooper Housing Development, Mr. and Mrs. W.H. Barnim, of Grimsby, were notified by telephone that the dead woman was their daughter, Mrs. Alfred Nimmo, the former Gladys Barnim.

"Although no name was given on the radio, I had a premonition it might be Gladys because I knew she lived in a 13th floor apartment at that address," Mrs. Barnim said this morning. "We were talking about it when the phone call came from her husband in New York."

Born in Grimsby in January 1908, Gladys Barnim was educated at Grimsby schools and later graduated from the New York City hospital as a nurse. After several years in the social service of that city, she enlisted in the United States Army Nursing Service with rank of Lieutenant, serving overseas for nearly 3 years. Since then she has been on the nursing staff of the Metropolitan Insurance Company.

Early in the war she was married to Alfred Nimmo, of New York, and she and her husband were frequent visitors to her parents' home in Grimsby.

Surviving besides her husband are her parents, Mr. and Mrs. W.H. Barnim, and a sister, Mrs. William Byford, of Grimsby.

A New York news dispatch states that the explosion wrecked Mrs. Nimmo's three-room apartment but that other apartments in the big building escaped damage. New York police reported that a note, apparently written by Mrs. Nimmo, was found in the living room of the apartment. In part, it said, "I leave everything to my husband except my life insurance policies which I leave to my parents for their help and support." Police further said that they found gas jets open in the apartment.

Funeral services were held from the Stonehouse Funeral Home Wednesday afternoon at 4 o'clock. Rev. George McLean officiated at the service, and also at the grave in Queen's Lawn, where interment was made. 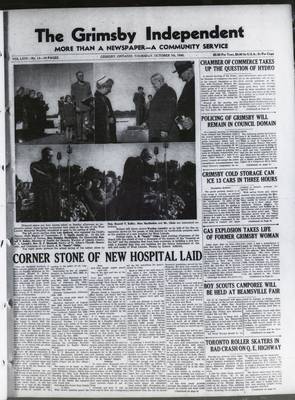