The many friends in Grimsby of R.S.M. George and Mrs. Watkins were greatly shocked on Monday afternoon and Tuesday to hear of the sudden death on Labor Day morning of Mr. Watkins.

The first intimation of his passing came when ex-Mayor Edric S. Johnson received a telegram from Mrs. Watkins, at Capreol, stating that he had passed away that morning on the Transcontinental Limited of the C.N.R. lines.

Mr. and Mrs. Watkins had been guests at The Village Inn the past three weeks while visiting with old friends in Grimsby and the district. They had left Grimsby on Sunday evening and Toronto a little later in the evening enroute to their home in Winnipeg. To date that is all the information regarding his sudden demise that has been received.

R.S.M. Watkins was born in England and had served a few years in the Royal Marines before coming to Canada and Grimsby to live. Shortly after arriving in Grimsby he joined "H" Co., 44th Regiment and soon obtained his three stripes. When the First World War broke out he enlisted for overseas service with Capt. Ralph T. Johnson and went overseas with the 4th Battalion First Canadian Expeditionary Force.

In the summer of 1915 he returned to Canada and became R.S.M. of the 98th Battalion which was being raised by the 44th Regt. and returned overseas with that unit in July of 1916. After the Armistice he returned home and shortly after moved to Winnipeg to reside with his family. 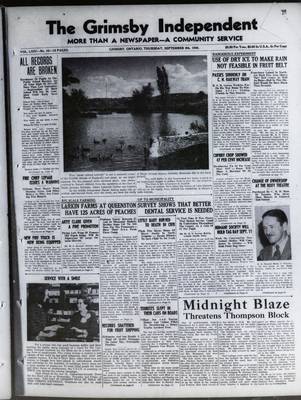