Wm. Ralph Boehm, an outstanding citizen of Grimsby, has passed to his last reward, and the town mourns the loss of a good man, a man who has in 29 years conducted a brilliant business life, as well as establishing himself as a most strenuous worker in the service club of which he was a member, and also in his church, where his efforts have been of considerable magnitude.

Ralph Boehm passed away quietly at his Livingston Avenue residence last Wednesday night, following a lingering illness, thus ending a life that began in 1888 in the little village of Elora.

Coming to Grimsby 29 years ago, deceased was connected with E.D. Smith and Sons for 13 years, and after his capable work there, he set himself up in business here as an insurance broker.

However, his business career was interrupted in 1915, when he joined the 169th Battalion at Toronto, and went overseas with the C.E.F., and saw considerable action with the 20th Battalion in France. His army record was a brilliant as was his later business life, for he was promoted to the rank of Captain, and was awarded the Military Cross.

Coming back to Grimsby after the hostilities had ceased, he led an active life in various organizations, and was known as a seemingly untiring worker in any movement that he was associated with.

He was a past Warden of St. Andrew's Church, and was a charter member of the Grimsby Lions Club, with which he served faithfully, and with always the thought of improvement for the current problems, with no thought for himself.

And the West Lincoln Branch of the Canadian Legion will mourn his loss, for at all times did the deceased faithfully fulfill the duties with his comrades.

And only one night before his death, executive of the West Lincoln Memorial Hospital paid tribute to the deceased by placing his name on the board of directors, he having served the hospital since its inception. His crusading for the first hospital earned for him this token of appreciation.

Wm, Ralph Boehm leaves to mourn his passing, his widow, the former Anna Medland, one daughter, Barbara Ann, and one son, "Pat". Also a brother, A.F. Boehm, and a sister, Mrs. H.C. Chant, both of Toronto.

Quiet St. Andrew's was filled to overflowing on Saturday afternoon, when Rev. E.A. Brooks conducted final rites for the man whose many friends and associates came to pay their last respects. Floral tributes were many and beautiful.

Interment was made in the family plot at St. Andrew's. 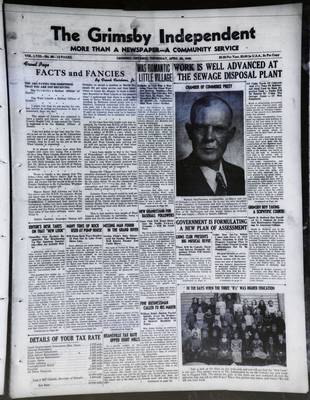