Ex-Mayor Arthur Hewson Had Been Ill For Some Months - Served Grimsby On The Last Village Council And As Mayor For Six Years And Latterly As A Water Commissioner - Began His Life Work In The Basket Industry In The Early 90's - Conducted A Great Amount of Experimental Work On Fruit Containers - Funeral On Monday Very Largely Attended.

Despite the fact that he had been in poor health for several months, it still was a great shock to the whole Niagara Peninsula, to learn on Friday afternoon last that Arthur Hewson had answered the call of his Maker. He passed peacefully away in West Lincoln Memorial Hospital (temporary), at 2:42 p.m. Medical aid and nursing aid were of the finest but nothing could be done.

Arthur Hewson was a very outstanding man in the fruit basket industry of this Peninsula. He learned the business of basket making from the early 90's, when the business was in its infancy. Through his long years of experience he was able to help other manufacturers as well as himself. He developed some new ideas on baskets, some good, some not so good, but it was a matter of experimentation.

The late Arthur Hewson started his basket making career as a boy in the old Carpenter Basket Factory, then situated on Main West, the east side of the street, at the top of Palmer's Hill. He went on from there and was for some years the foreman of the John H. Grout factory that was then situated on Oak Street where the United Distilleries is now located. That factory then became part of the Consumers Box and Lumber Co. unit, and it burned down in June of 1914.

A few years later Mr. Hewson in conjunction with the late Henry H. Farrell formed what is now known as the H.H. Farrell and Sons Co. They built and operated the present Farrell factory on Elm Street. As time went on they dissolved partnership and Mr. Hewson then acquired the Lewis mill property on Main Street West, in the hollow, next the Old Forty Creek and developed it into one of the best basket producing plants in the district. Just about that time is when he took his son William into the business with him.

As years went on they expanded their basket business and also entered into the coal and wood business.

Born in the Township of Caistor, the eldest son of Andrew and Julia Hewson, he came to Grimsby at a very early age, so practically lived all his life in Grimsby and the Fruit Belt.

A man who always believed that his municipality was part of him, he was elected as a member of the Village Council in 1921, under the Reeveship of the late Henry H. Marsh. That council was composed of Reeve Marsh, Councillors John E. Scott, Dr. J. Franklin McLay, Edgar E. Farewell and Arthur Hewson. Mr. Hewson is the last of the last Village Council to Go Home, for on January 1st, 1922, Grimsby became a town.

He served on the Town Council during 1922-23-24-25. In the January elections of 1926 he defeated the late James A. Livingston for the Chief Magistrate's position which he filled honourably for 6 years and then became a private member of the Water Commission.

Fraternally he was a Past Noble Grand in the Independent Order of Oddfellows, and a member of the Canadian Order of Foresters, and in religion he was a member of Trinity United Church.

Funeral services were held in Trinity United Church on Monday afternoon and were very largely attended by friends, fruit growers and businessmen from all the district. Rev. A. Leonard Griffith conducted the services. 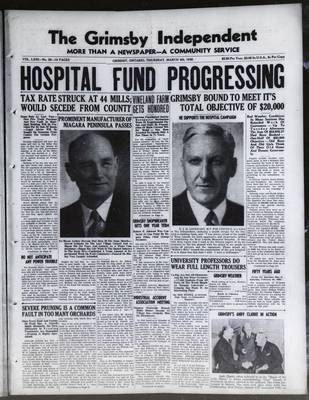