A little black and gold plate Friday rested in the doorway of "West the Barber". The little card bearing the one word - Bereaved - was indeed a sincere message, and is how a great host of friends and business acquaintances felt toward the shocking and sudden death of Walter West, who, during his 32 years as a business man on Main Street, had not only become an institution, but a symbol of the type of man that towns like this are noted for.

Always an early riser, Walter West was up early on Friday morning when he was stricken suddenly. He passed away quickly, this ending a comparatively young life which began in Clinton Township in July 1891. He was the son of the late George and Ellen West, and following a boyhood in this district, he moved to Niagara Falls, but came to Grimsby some 32 years ago and has resided here ever since.

He has conducted a fine business establishment here, and his many friends will sadly miss their daily chats with the man who was so well versed on sporting topics, especially sports pertaining to the training of hunting dogs, trap shooting, and a vast knowledge of harness horses and all angles pertaining to this particular sport.

Funeral services were conducted from his late home on Adelaide Street, while members of the Masonic Union Lodge, No. 7, A.F. & A.M., of which the deceased was a member, gathered to perform the Masonic rites, while Main Street merchants closed their doors in respect to a departed businessman and citizen.

Rev. H. J. Scott of the Presbyterian Church officiated at the residence where the floral tokens were extremely bountiful, as sportsmen, businessmen and friends paid their last respects.

Interment was made in Queen's Lawn Cemetery as a cold January wind rustled in the trees. 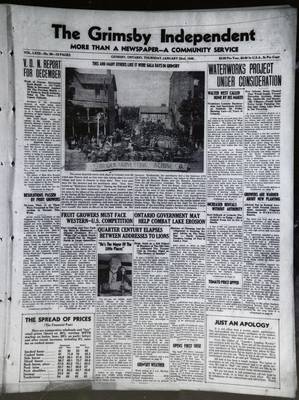