James Ferris, 31-year-old Dundas man, Tuesday was committed for trial in Hamilton on a charge of manslaughter in connection with the death on Nov. 25 of Clarence Henry Rushton, formerly of Grimsby, but at the time of his death proprietor of the Rushton Cafe in Dundas.

Clarence Rushton, the 17-year-old son of the deceased man, described to the court incidents surrounding his father's death. He said he was in the cafe in the early morning of November 25 when Ferris started arguing about his meal cheque.

The father was attracted to the front of the establishment by the sounds of loud voices and a struggle with Ferris ensued. When Police Constable Walter Wadge was admitted to the cafe about 1:30 in the morning he found Rushton in a dying condition. The police officer had witnessed part of the struggle through the locked door of the restaurant.

Until moving to Dundas a short time ago, Rushton was active in sports and other activities in Grimsby, being associated with the Grimsby Peach Kings as manager for a number of years. 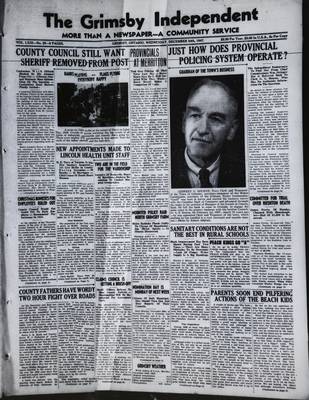