Senator J. Joseph Bench, K.C., prominent St. Catharines barrister and youngest member of the Canadian Senate at his appointment 5 years ago, died suddenly at his home early Tuesday afternoon. He was in his 43rd year.

Some years ago Senator Bench had been confined to his bed as the result of a heart condition, but he had recovered and had continued with his busy legal and government activities. About a week ago he became ill and was taking a rest on doctor's orders. His illness became steadily worse and last night when his condition became critical four specialists were called to his bedside.

Associates said Tuesday morning it was thought he had pulled through the crisis, but he suffered a heart attack about noon and passed away at 12:15 p.m.

He is survived by his wife, the former Callie Dunn of Toronto, and an infant daughter, Mary Margaret Ethel. Senator Bench and Miss Dunn were married just one year ago October. He is also survived by two sisters, Miss Marie Bench of St. Catharines and Sister Veronica of the Loretto Community, Niagara Falls. An uncle is Rt. Rev. J.J. Bench of St. Joseph's Parish, Toronto, who was elevated to the position of Monsignor in the Roman Catholic Church a few weeks ago.

Word of his death, which spread quickly through the peninsula, came as a distinct shock to the citizens of the city and district and to his many friends in all walks of life throughout Canada. He was particularly well known in national government and business circles throughout the Dominion, and his capabilities were highly and widely regarded.

Senator Bench was senior member of the law firm of Bench, Keogh, Rogers and Grass, of St. Catharines. He founded this firm more than 15 years ago,and in its development he had won wide recognition for his conduct of noteworthy legal cases in various sections of Canada.In his government and legal capacity, he was at the time of his death leading a campaign to have the production and sale of oleomargarine legalized in Canada.

Senator Bench was highly regarded by Prime Minister Mackenzie King and an expression of this esteem and recognition of talent was given when he was appointed to the Senate in November, 1942. This was the first Senate appointment in St. Catharines, and the third in Lincoln County, and was the first step by the Liberal government towards the reorganization of the Senate. As part of this reorganization, younger men have been appointed to the Red Chamber and at that time Senator Bench, then 37, was the youngest.

Senator Bench took a keen interest and displayed a deep sense of responsibility in his work in the Senate and was a leader on several committees which were studying ways and means of clarifying various aspects of the country's legislation. Although he was a Liberal appointee, he did not hesitate to take issue frequently with legislation introduced by the government with which he differed in the national interest.

Senator Bench was born and educated in separate schools. He attended the collegiate where he won a gold medal for oratory. Entering Osgoode Hall in 1925, he graduated in 1928 and was called to the bar in the same year. He started the practice of law here in that year.

At the time he was honored by being appointed a King's Counsel, he was the youngest in the British Empire.

During the war period he was a director of St. Catharines Steel Products Ltd., a company which was engaged in manufacture of munitions and was one of the largest in the St. Catharines area. 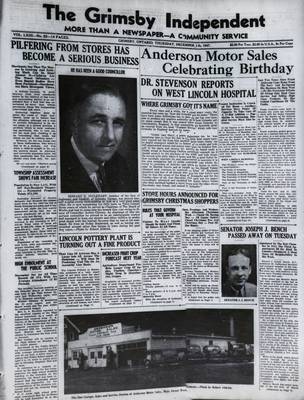