Young businessman passes on Saturday - Frederick C. Case, one of this community's most popular young businessmen, died at the Hamilton General Hospital on Saturday, in his 32nd year.

Of pleasing personality, he was liked by all who knew him and will be greatly missed from his accustomed place.

A resident of Grimsby for the last 15 years, he was born at Aurora, Ontario, on October 23, 1916, a son of Mrs. Agnes Case, Grimsby, and the late Ralph Case. He was engaged in the retail meat business with his father until the death of the latter on November 20, 1943.

Following his father's death, he operated the business himself until recently. He took an active part in promoting sports among the younger lads, particularly in baseball.

He was a member of St. Joseph's Roman Catholic Church, and of Hamilton Council, Knights of Columbus.

Surviving, besides his mother, are three sisters: Mrs. Bert Pratt and Mrs. Jack Innis, of Toronto; and Mrs. Frank Barnes, of Aurora.

Remains rested at the Stonehouse Funeral Home until Tuesday morning when funeral Mass was held at St. Joseph's church at 9 a.m. Interment being made in Queen's Lawn Cemetery. 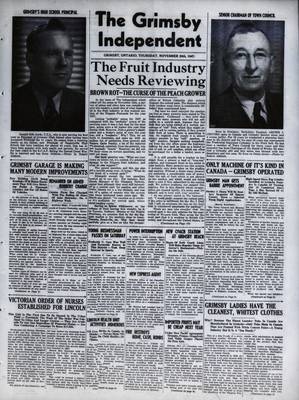