Family of Mychaylo Holynsky, noted Ukrainian concert artist, are now united at their Grimsby home after weary years in concentration and labor camps - other families also united after years of separation.

Tears of joy were shed by men and women alike when a group of Ukrainians, most of whom had spent considerable time in German concentration or labor camps, arrived in Grimsby Saturday morning and were re-united with members of their families they had not seen for many years.

Mychaylo Holynsky, noted Ukrainian concert artist, now living in Grimsby, welcomed his wife, Helen, a pianist and teacher of music; his son, Bohdan, medical student who was forced to work in a Nazi labour camp; and his daughter, Myroslawa, who is a talented painter. Mr. Holynsky had not seen his family since before the war.

Ivan Kostiw, of Grimsby, who came to Canada from the Ukraine 24 years ago, met his sister and brother-in-law, Mr. and Mrs. Michael Baraniuk, whom he had not seen since leaving his homeland. Both of them endured great hardship and suffering at the hands of the enemy.

Sam Tesiuk, North Grimsby, met his sister, Mrs. Maria Karchemny, for the first time in over 20 years when she and her husband, Joseph Karchemny, stepped off the train.

In addition to those mentioned above, several others arrived on the same train, and still more are due to arrive later.

"It is grand to be in Canada at last and have the chance to become a man instead of a number," said Bohdan Holynsky, who wants to continue his studies in medicine with a view to becoming a doctor in the Royal Canadian Army Medical Corps. This fine looking lad, who speaks eight languages, said he wants to rest for two or three months before resuming his interrupted studies. "I saw things in the labour camps and elsewhere that are only to dream about and I want to forget them," he said. 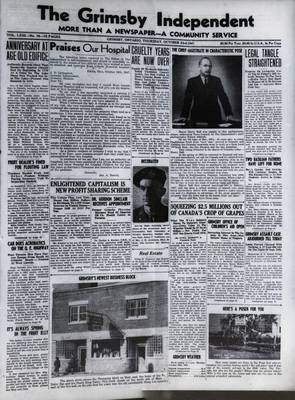