The above death notice appeared in The Toronto Globe and Mail on Tuesday morning, and concerns a former Grimsby resident. As can be perceived the notice does not state where the accident took place and friends in Grimsby of Mr. and Mrs. Storrs are in a quandary as to just what happened.

Mr. and Mrs. Storrs were visitors in Grimsby over the weekend of Sunday, Sept. 21st, staying at "Green Trees" and visiting with Major H. F. Baker, Baker's Road, and other old friends in the district. They left here on their return motoring trip to their home in Fargo, N.D.

In the early 1900's, Mr. and Mrs. Storrs came to Grimsby and engaged in fruit farming for a couple of years, later moving into town and buying the novelty store business of the late Mrs. Torrey, then located in the old Woolverton block where the Temple building now stands. They operated this store for a few years and sold out to a man the name of Yeo and moved away from Grimsby.

Mr Storrs was an exceptionally clever landscape architect and eventually landed in Fargo, N.D., where he has been for some years in charge of a government National Park.

Up to the time of going to press Grimsby friends have received no other information regarding the accident except that contained in the Globe and Mail death notice. 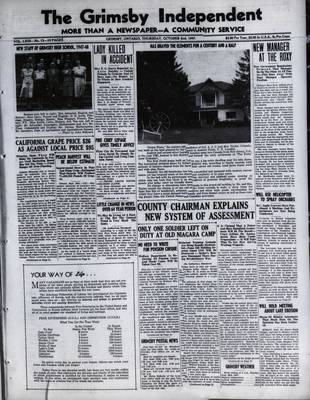