Prominent district physician called home - After many years of unstinted service in a little community, Dr. Cameron W. Elmore, coroner for Lincoln County and medical officer of health for Clinton Township and Beamsville, died Tuesday afternoon at the family residence, Beamsville. Loved, respected and admired, the genial doctor has for nearly 40 years held the trust and confidence of a large practice. During the long war years, although not well himself, he carried on alone in a community which needed three doctors. With his death, an era has come to an end. He was a real family doctor, one who cared for the sick and was interested in the problems of the well.

Born at Springvale, he was the son of the late William Elmore and Mary MacDonald. He was in his 64th year. In 1908 he graduated from the University of Toronto, and after a year's internship at the Hamilton General Hospital, he began his practice in Campden, where he resided, and in Beamsville, where he maintained an office. In 1913 he moved to Beamsville, where he has resided every since.

Dr. Elmore had not been well for some time and it is believed his death was hastened by an accident in which he was involved about three weeks ago. During the past year, he had retired more and more from public life, carrying only with the most essential of his duties.

Surviving in addition to his widow, the former Irene S. Adams, are 5 brothers, John, Stanley, Wallace and Magistrate Thomas Elmore, K.C., all of Toronto, and Bruce, of Winnipeg.

The funeral will be held from the family residence, King Street, Friday afternoon at 2:30 o'clock. Entombment will be made in Victoria Lawn Mausoleum, St. Catharines. 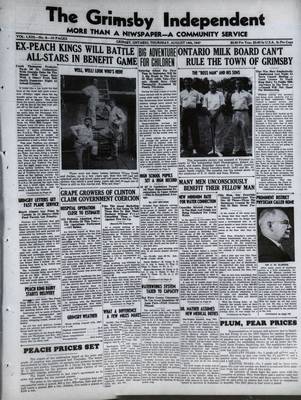