It was announced by Coroner C.W. Elmore of Beamsville last week that no inquest would be held into the death by drowning of Vernon Cecil Thompson of Montreal. Mr. Thompson met his death while swimming at the beach just east of Maple avenue last Thursday afternoon.

The actual cause of Mr. Thompson's death has not been ascertained, though medical men incline to the belief that he died after a fainting spell which came as he was "jumping the waves" with his 12 year old daughter, Marilyn. Rev. M.N. Omand, of North Bay, who assisted the deceased man's wife and daughter immediately after Mr. Thompson was stricken, said at the time he believed that he was breathing when he was brought from the water. During the three hours of artificial resuscitation carried out by members of the Stoney Creek fire department in a vain attempt to bring him round, considerable water was dislodged. As far as his family know, he was not previously subject to heart trouble.

High praise for the manner in which the deceased man's daughter acquitted herself in the emergency was heard on all sides. When she noticed her father's plight, she immediately held his head above water and called for help. Mrs. Thompson rushed into the water fully clothed and the two brought the unconscious form to the beach.

Help was forthcoming right away, and while a call was put in for medical assistance, men working at Hand's fishing station started the long and tedious work which was later taken over by the Stoney Creek firemen. Neighbouring cottagers brought hot coffee and sandwiches to the workers, who worked through without their noonday meal. Edward, Joseph and William Hand, and Cpl. Keith Brown, R.C.A.F., stationed at Trenton, were those who started the work.

Dr. A.F. McIntyre, the first doctor on the scene, remained until the end, and it was after nearly three hours of work with the inhalator brought from Stoney Creek that he pronounced life extinct. During the process he continued to inject stimulants into Mr. Thompson's veins. Dr. J.H. MacMillan, who visited the scene, administered adrenalin.

The Thompsons were staying at one of the Harvey cottages which Mr. Thompson's sister, Miss Edith Thompson, of Oxford, Nova Scotia, had rented for a few weeks. 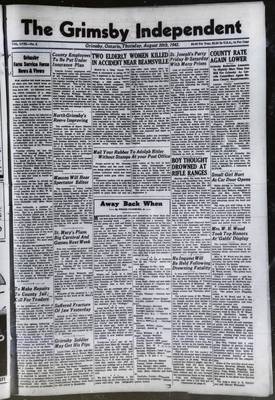