After a long, lingering illness, borne with great fortitude, there passed away at Grimsby east, on Saturday, June 23rd, 1923, Joseph Simmons Secor, beloved husband of Dora Durham, in his 63rd year.

The deceased was born in Scarboro township and came to Grimsby Centre about 43 years ago. Three years later he married Dora Durham, daughter of the late W.B. Durham, and resided on the late Mr. Durham's farm, until 8 years ago, when he moved to Grimsby and later to Grimsby East.

Deceased took an active part in politics and municipal affairs, being in the South Grimsby Council for 8 years, two years of which he was reeve.

Left to mourn his loss, are his widow; one son, Herbert, now residing on the old homestead, and one daughter, Mrs. J.S. Mortimer, of Grimsby East; also three sisters, and two brothers, Mrs. T. Walker, Mrs. W.R. Patterson, Mrs. A. Graham, all of Grimsby; Arthur G., of Calgary, and Milford, of Wansan, Wis.

The funeral took place from his late residence on Tuesday, June 26th, 1923, at 2:30 p.m., to Queen's Lawn Cemetery. The pallbearers were: W.C. Durham, G.L. Book, J.M. Durham, W. O'Connell, Jno. Erb and I. Piett. Rev. Mr. Ballard officiated, assisted by Rev. Mr. Currie and Rev. Mr. Dumas, of Smithville. The floral tributes testified to the high esteem in which deceased was held. 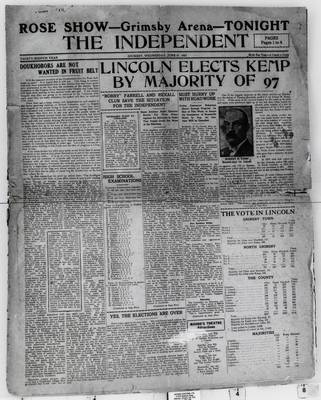