At two o'clock this afternoon, the Grim Reaper visited the Hotel Grimsby, and cut off in the prime of life one of Grimsby's most prominent citizens in the person of John [Jack] Wesley VanDyke, at the age of 55 years. The deceased gentleman had been ailing for over a year, but was able to be up and look after his hotel and his farm up till about 5 weeks ago when he was taken down and forced to go to bed, from which he never again arose... The deceased was born in Grimsby and has lived here practically all his life... When quite a young man, in fact still in his teens, he started in business with a man by the name of Crawford in the manufacturing of novelties of flats and leather of such goods as school bags, music rolls, dinner boxes and so forth. He left this business and went away to the States...He then returned home and later went on the road as traveller for the Gilray Stretcher... [business information]...After his return from the States, he was married to Mary Ann Mabey, a sister of S. E. and Charles F. Mabey, and had a family of two boys. She predeceased him about 21 years. About 16 years ago he was married again to Miss Mary Ness of Smithville who survives him...He leaves to mourn his loss, besides a large circle of friends and acquaintances, a widow, two sons, Fred A. of Hamilton, and Melvin L. at home, and three brothers, Geo. S. and W. B. of Grimsby, and Arthur of Toronto. The funeral will take place on Friday afternoon from his late residence, the Hotel Grimsby, to Queen's Lawn Cemetery, Grimsby at 2:30. 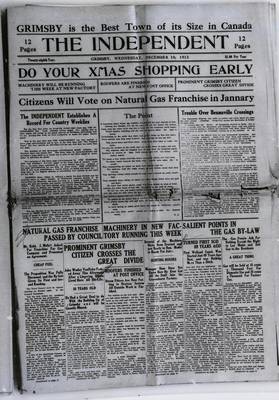