Mrs. Sylvester Smith of Winona, Ont., who passed away at the residence of her eldest daughter, Mrs. H.A. Coon, of Weston, Ont. on November 18, was born near Hartland, New Brunswick, September 27, 1831, and receiving an education fitting to teach school, came to Ontario then called Upper Canada at the age of 18. She taught school in Saltfleet at a school situated near the top of the Lee Moutain, and at the age of 21 married the late Sylvester Smith, who owned a good farm of 170 acres two miles east where they lived until the death of her husband in 1885 ... They had six children ... the eldest, Earnest D. now Senator Smith, ... the only other son was Cecil B., seven years the junior of Earnest D. ... his (Cecil) rapid rise and most successful career was cut short by death at the comparatively early age of 48 ... of the daughters, besides Mrs. Coon, the eldest at Weston, is Elizabeth, who received a [degree from the] University in Kingston, being one of the first three lady doctors in Canada to receive a degree. She practiced medicine successfully in Hamilton for a few years and then married Professor Adam Shortt ... the other daughters are Miss Gertrude ... and Miss Violet ... The funeral took place took place from the Hunter Street station, Hamilton ...[page wrinkled] 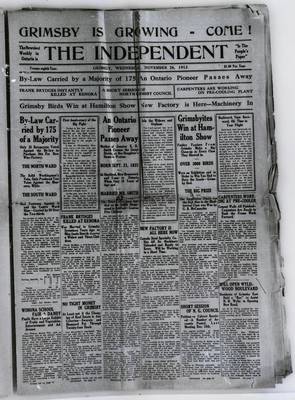