An explosion took place with fatal and disastrous results at the home of Mr. Edward Keith, just outside of Beamsville, on Saturday, about 8:00 o'clock p.m. with the result that Delbert Keith was instantly killed, his brother Kenneth was very seriously, if not fatally, injured and his father, Edward Keith, was also seriously injured. Mr. Keith and his sons had decided that they would blow out the very large stump of a tree which had been recently cut down, and prepared to have the explosion take place on the evening of Victoria Day. ... Delbert ... was 14 years of age, Kenneth who was 16 years old was very seriously injured ... Mr. Edward Keith, a man of about 50 years of age, well and popularly known throughout the entire district as he was a motorman and conductor on the H. G. & B Electric Railway ... The funeral of Delbert Keith ... took place from the home of his parents on Tuesday afternoon at 3:00 o'clock ... interment followed in Mr. Osborne Cemetery. The pallbearers were Blake Davidson, Ross Hobden, Clarence Konkle, Claude Lister, Roderick Stewart and Douglas Stewart. There lives to survive him his mother and sister at home and his father and Kenneth still in a very precarious condition. 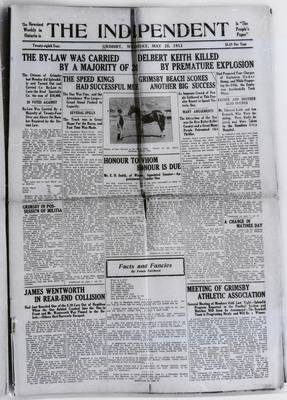