One fatality and other accidents involving injuries to passengers in motor cars occurred in the district during the past few days. An inquest has been ordered by Dr. D.V. Currey to enquire into the death of Leslie Corman, 20, of Louth Township, who was almost instantly killed when the buggy in which he was riding was struck by a car on the provincial highway west of the Fifteen Hill Monday evening. Leo Corman, 15, brother of the youth who was fatally injured, is in the General Hospital, St. Catharines, suffering from injuries to his face, right arm and leg. He will recover. C.V. Starkweather, Tonawanda, driver of the car which struck the Corman buggy was not hurt... William Randolph Leslie Corman, the deceased, was the son of Mr. and Mrs. William J. Corman, Louth township. He resided with his parents and was a member of Rockway church...Besides his parents he leaves three brothers, Alvin, Leo and Norval; and one sister, Virginia. The remains are resting at the funeral home of Winter and Winter until Wednesday morning and the funeral will be held at 2:30 Thursday afternoon from the family residence to Rockway cemetery where interment will take place. 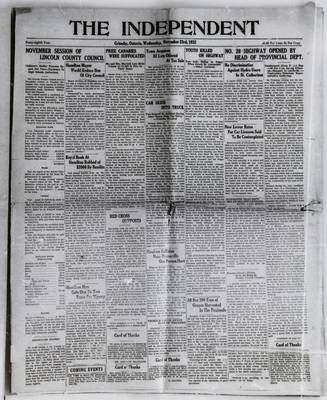