The home of Mrs. Thomas Flint, Grimsby, who is the mother of five children and the wife of a war veteran who died of wounds received in the war, was the scene of a tragic and fatal accident on Friday evening last when her bright little four year old daughter, Margaret Jane, died in convulsions after eating several chocolate-coated pills, which ,it is said, contained strychnine. She found them in a box in the shelf on the sideboard of her home. Coroner Dr. J.F. McLay, who was called just before the little girl died, summoned a nurse. He stated that had a doctor been summoned early the child's life would no doubt have been saved. The mother, however, did not know what the child had taken and when she complained of pains in the stomach, the mother thought that it was only a minor complaint, and treated it accordingly. It was not until the Coroner questioned the older boy, George, that the fact was disclosed that the child ate 25 of the pills, containing probably a grain of strychnine. The tragic happening came as a severe shock to the mother who remained beside her dead child the entire night, but early on Saturday collapsed and was forced to her bed. The funeral of the child took place on Saturday, interment being made in Queen's Lawn Cemetery. Owing to the fact that the family, which consists of the mother and the remaining four children, is without funds, the relief committee of the town appealed to and made the necessary arrangements for the burial of the child. The children are being cared for by friends. 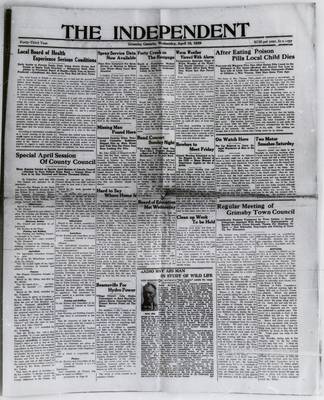