At an inquest into the death of Alex Scatch who was fatally injured in a recent highway accident held in the Grimsby chambers Wednesday afternoon, the following verdict was returned: We, the jury, find that Alex Scatch died in St. Joseph's Hospital, Hamilton, on or about March 20, 1934 as a result of injuries received when struck by an automobile driven by Raymond Schwerk, Silver Creek, New York, on the King's Highway No. 8, about 3 miles west of the town of Grimsby at approximately 11:30, Sunday March 18.

The evidence was to the effect that Scatch had been on the road in the path of Schwerk's car and had been struck. Schwerk returned to the scene of the accident as did Gordon Trent who was travelling westward at the time of the accident and witnessed it. The injured man was then conveyed to the West End Motor Garage, Grimsby, where Dr. MacMillan was called in. Here Schwerk was questioned by police. Schwerk testified that he had been blinded by the lights of approaching cars and had not seen Scatch until 3 feet from him. Scatch was bending over the bicycle which was stationary on the road. After being hit Scatch was knocked to the side of the road. Both his rubber boots were off and were found some distance away. Schwerk swore that he had had nothing to drink previous to the accident and Officer Bond stated that he had smelled liquor on one of the party but could not state which one. Officer Bond stated also that Schwerk had answered oddly and had to be repeatedly questioned. Trent asserted that right after the accident Schwerk had seemed perfectly normal and had not smelled of liquor. Dr. Ballantyne, who performed an autopsy on the body of the deceased said that death was due to peritonitis brought on by internal injuries. The right leg of the deceased was broken just above the ankle and he sustained a compound fracture just below the knee. There were also superficial cuts and bruises. Dr. MacMillan stated in his evidence that Scatch was delirious prior to his removal to the Hospital. Trent saw Scatch outlined in Schwerk's headlight but though he did not see the man hit had heard the impact. It had been proposed that Scatch be removed at once to a hospital but a truck driver who was passing refused to perform this office so the injured man was brought back to Grimsby. He, Trent, judged the other car's speed to be normal.

Crown Attorney Lancaster afterwards intimated that it was improbable that any further charge would be laid. 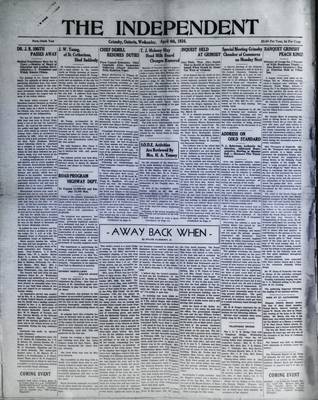