Grimsby Centre - The sad death occurred on June 19th at St. Joseph's Hospital, Hamilton, of Flossie Southward McCready, second daughter of Mr. and Mrs. Isaac Southward, South Grimsby in her 25th year, after a severe illness. Funeral services were conducted by Rev. Allen Ballard on Saturday, June 21st at the home of her parents, thence to St. Andrew's churchyard. The floral offering were numerous and beautiful showing the esteem in which she was held by her many friends.

Special mention can be made of the Women's Institute of which Flossie was a member, both in their kindness through her sickness and sympathy and flowers sent after her death. She leaves to mourn her loss, a sorrowing husband, the bereaved parents, two brothers, Marvin and Melvin and two sisters, Mrs. Edward Smith and Mrs. Clifford Young both of Grimsby as well as a host of relatives and friends. There was a large gathering of friends who came to view the remains before and at the funeral. 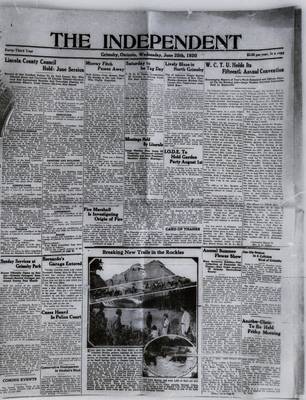