Surgeon-Lieut. Clarence E. Irvine, R.C.N.V.R., of Timmins and Grimsby, reported missing in the sinking of H.M.C.S. Valleyfield in the north Atlantic, is a son of Mr. and Mrs. Norman Irvine, 26 Oak Street, Grimsby, and a brother of Mrs. Audrey Topp, of Silverdale. Born in South Grimsby township, near Grassies, he is 36 years of age. He attended Smithville High School and Central Collegiate in Hamilton, later going to Queen's University, Kingston, where he earned his medical degree in 1932. After graduation, he spent a brief period at Rouyn, then moved to Timmins, where he had a practice. He had been stationed at a naval hospital in Newfoundland prior to going to sea in the Valleyfield a few weeks ago.

A tragic story attended the death in H.M.C.S. Valleyfield of Surgeon-Lieut. Clarence E. Irvine, 37, R.N.V.R., of Grimsby, according to a navy press release.

Surgeon-Lieutenant Irvine did not belong to the ship. He was called over at sea on an errand of mercy and had the misfortune of being in the frigate when the torpedo struck.

A quiet, popular officer, who gave up a good practice in Timmins to join the service, Surgeon-Lieutenant Irvine received his first official sea appointment less than a month ago, to the corvette H.M.C.S. Halifax.

On the return trip from the United Kingdom, he was summoned from Halifax to H.M.C.S. Giffard to attend the commanding officer, Lieut.-Cmdr. Charles Petersen, R.C.N.R., of Victoria, who had been ill with quinsy. He was about to return to his ship when a rush call came from Valleyfield, saying that a man was sick, and asking if the doctor could be spared.

Surgeon-Lieutenant Irvine went across to the frigate in a sea-boat. His patient was feared to have been stricken with appendicitis, but after examination, the naval doctor decided to apply ice and see if he could nurse the man until the ship reached port and operational facilities. If the appendix ruptured, he would operate at sea.

Survivors related how, instead of going to an officer's cabin, he decided to stay in the sick bay with his patient. Thus he met his death. He was never seen from the time the torpedo struck. 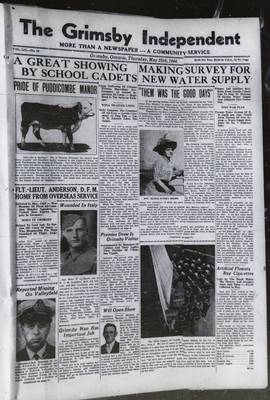