Albert George Boulter, one of the district's most prominent business men and a former mayor of Grimsby, passed away at his home in Smithville on Thursday evening last. Although he had been in poor health for several months, his death was unexpected and news of his passing was received with deep regret by a wide circle of friends. In his 73rd year, he was born at Vittoria, Ont., in 1871. In younger life he spent 15 years as an assistant road master with the G.T.R., working between Toronto and London. Coming to Smithville in 1904, he opened a store. He was head of the firm A.G. Boulter & Sons, which operated stores in Grimsby, Beamsville and Smithville for several years. He moved to Grimsby in 1923. While here he took an active part in municipal affairs and was mayor of Grimsby in 1931 and 1932. Closing the Grimsby and Beamsville stores, he returned to Smithville in 1934 and retired from active business. The Smithville grocery business was taken over by his son Bert and the butcher business by the other son, Frederick. When Bert Boulter enlisted in the army his father assumed the management of the grocery business and looked after it until a few weeks ago. He had served 10 years in South Grimsby township council and was always active in the interests of the Agricultural Society. He was an elder of Smithville United Church for the last 10 years. While residing in Smithville the first time he served on the church board of management. He was a past master of Coronation Lodge No. 502, A.F. & A.M., and a member of Smithville Chapter, R.A.S. On May 24 last, he and Mrs. Boulter observed their 51st wedding anniversary. Surviving besides his wife, the former Ellen Williams, are two sons, Frederick of Smithville, and Pte. Bert Boulter, R.C.A.S.C.; three brothers, Charles, William and Thomas Boulter, all of Toronto, and a sister, Mrs. Florence McKnight, of Simcoe. Owing to the serious illness of Mrs. Boulter, the funeral of Albert G. Boulter, held from his Smithville home Monday afternoon, was private. An exceptionally large number of floral offerings from organizations and friends gave evidence of the high esteem in which Mr. Boulter was held in this and nearby communities. Services were conducted by Rev. E.J. Boyd, of the United Church, and interment was made in Fonthill Cemetery. Honorary pallbearers were: Samuel Miller, Levi Hartle, William Trembley, David Disher, Percy Wilkins, Andrew Clougley, M.B. Cosby and Manuel Zimmerman. Active bearers were: David Brough, Radford Vance, L.P. Killins, Harold Angle, Charles Shrum and R.C. Topp. 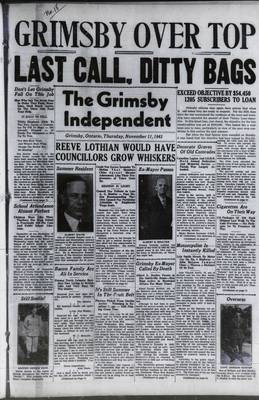