Another chapter in the mysterious fire which gutted the barns and shed of J.W. Nelles, Nelles Side Road, in the early morning of May 4, was conducted yesterday at the Ohsweken Indian Reserve when Davis[sic] Williams, an Indian laborer, passed away from burns believed caused by the fire. Williams, a veteran of the Great War, was 68 years of age, and leaves a son. On the night of the fire he was believed sleeping in a shed near one of the barns, and witnesses of the fire, which was reported at about four in the morning, told of a figure leaving the building with his clothing on fire. Williams was not seen for some days despite a close watch kept for him by the Provincial Police. Finally he was reported at Jordan, and a couple of days later was discovered on the farm of Samuel Young, Grimsby Beach. He was sleeping in a shed built for storing baskets in an isolated part of the orchard, and it was by chance that he was found. The shed is seldom visited for months on end. Provincial Constable E. Hart, who responded to the call from Mr. Young, found the aged man in great pain and weak from hunger. He removed him to Grimsby, where signs of infection were seen on his leg. His removal to the Reserve was authorized by township officials, who arranged for the transportation. No decision has yet been reached regarding an inquest. At the time police questioned him, Williams maintained that he knew nothing of the cause of the fire. He insisted that he left the scene because of domestic trouble. He was fairly well known through this district having worked on many farms here during the past several years. 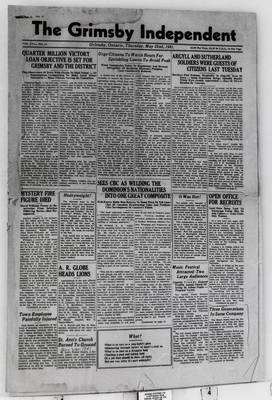