Again the grim reaper has visited the community of Spring Creek and removed a highly respected citizen, Mrs. Norman Comfort. She had been ailing for nearly a year with diabetes but it was only Monday, April 19, she became the victim of erysipelas and passed away on Saturday, April 24. Her death was unexpected and was a shock to all who knew her. She was born in 1864, and was the eldest daughter of Nelson and Mary Jane Simmerman Lane, and was one of a family of ten children. Her old home was across the way from Lane's Cemetery. She was married on October 20, 1880 to her now sorrowing companion, Norman Comfort, of Spring Creek. She was a member of the Disciple Church. The funeral took palce on Tuesday, April 27, from her late residence to the Disciple Church, Spring Creek East, for service, and thence to Lane's Cemetery for interment. She leaves to mourn, her husband, one son, William and two grandchildren; two sisters, Mrs. Curtis Hitchcock and Mrs. Frank Kinney; five brothers, Jacob, of Toronto, Eli, of Campden, Richard, Emerson and Freeman, of Twenty Road. Once sister, Mrs. Wesley Comfort and one brother predeceased her. The stricken family have the sympathy of the entire community in their time of sorrow. - Smithville Review. 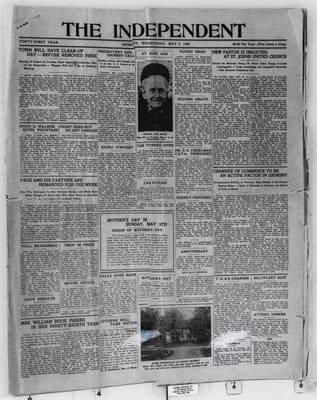