Dr. Donald Clark struck down while crossing intersection of Paton and Main Streets - wheels pass over body. In his 81st year. Had practiced dentistry for 53 years - 22 years in Grimsby - great bowler and curler - tulips were his hobby.

Grimsby district was greatly shocked and grieved on Thursday afternoon last, to hear of the untimely death of Dr. Donald Clark. Dr. Clark had been down town with his little granddaughter for the evening paper and to make some small purchases. They had returned to his home on Paton street, and then it was found that they had left one of their parcels in Joe's Restaurant, where they had purchased ice cream cones, and the Doctor came back down the street for it.

He was crossing Paton Street when a Canada Coach Lines bus in charge of John Bell, Kensington Ace., Hamilton, pulled up the hill on Main Street, turned south and stopped, and then backed up Paton Street in order to turn around and proceed east on Main. Apparently the driver did not see the Doctor behind the coach and the Doctor apparently did not realize that the vehicle was going to back up.

The heavy vehicle struck him, knocking him to the pavement and eyewitnesses state that both the rear and front wheels passed over his body. He was picked up and taken to the verandah of Mrs. Mary Rosebrugh and Drs. MacMillan and McIntyre were called. They worked over him for some considerable time, but the spark of life had fled. Chief of Police W.W. Turner was patrolling on Paton Street and was at the scene almost as soon as it happened and took charge. He communicated with Crown Attorney E.H. Lancaster. C.W. Elmore, Coroner, Beamsville, held a preliminary investigation and stated that an inquest would be held.

Dr. Clark had practiced his profession of dentistry for 53 years, retiring from active work a year ago last February. After graduating from the Royal College of Dental surgeons, Toronto, in 1888, he began the practice of his profession in Hamilton and resided there until 1901 - 13 years.

He then moved to the Township of North Grimsby, having married Miss Maude Hare, daughter of Thomas (the Clerk of North Grimsby) and Mrs. Hare. The old home was a fine stone house about 100 yards west of Kerman Avenue, which burned down 23 years ago, at which time Dr. Clark and his family took up residence on Paton street, and he opened up practice in Grimsby.

After his marriage he continued his practice in Hamilton for 18 years and 6 days a week, 52 weeks in the year he made a return trip on the old H.G. & B. He estimated that in that time he had travelled a distance of 200,000 miles.

Since Dr. Clark entered the profession at that very conservative period when the general rule was to pull no tooth that showed the slightest signs of life, dentistry has gone through many phases. Only one of the important developments has been the use of X-ray photography which, though not infallible, has often proved a valuable ally by uncovering hidden lesions and thus opening the way for effective treatment.

For many years Dr. Clark served on the examining board of the Royal College of Dental Surgery. In 1910 he was elected to the Board of Directors for a two-year term, and for the following two years held office as President. Flowers were his main hobby and at the old Hare Homestead he developed a wonderful tulip plantation. At one time he had as many as 135,000 tulips in bloom at once. More than one traffic tie-up has taken place in front of that tulip bed on a Sunday, caused by thousands of sightseers who came to see the glorious spectacle. There is little doubt but what the Doctor's hobby gave a great impetus to the growing of this Queen of Spring Flowers far beyond the Niagara Peninsula.

His recreations were bowling and curling, a natural thing, as he was of Scottish descent. He was a valued member of the old Grimsby Curling Club, now non-existent many years. As a bowler, it was more than recreation, it was real fun. He belonged to the first bowling club in Grimsby when the first greens in this district were laid out behind the present Hotel Grimsby and he bowled with all the other clubs that came into existence since that time. He participated in many of the large bowling tournaments of the Ontario Bowling Association, but never was fortunate enough to win the Scotch Doubles. It is only a few brief weeks ago that he was a guest at the Lions Club, when the Good Citizenship Medal was presented to his very dear friend, Rev. J. Allan Ballard, and at that time reminisced to some extent upon the great bowling games that he had participated in.

While never a man who sought civic honours, yet he was for many years a member of the Board of Education, and for 7 years was Chairman of the Board. He also had been president of the Grimsby Horticultural Society. A 33 degree Mason, he was a life member of Murton Lodge of Perfection, Scottish Rite; Rose Croix Chapter, and Hamilton Consistory. He was also a member of Hindoo Koosh Grotto, of Hamilton, and oldest Past Master of Temple Masonic Lodge, Hamilton.

Many friends from Hamilton and other points attended the funeral of Dr. Donald Clark held from his home Sunday afternoon under Masonic direction. Among them were member of several Hamilton Masonic bodies, including Temple Lodge, Murton Lodge of Perfection, Scottish Rite, Rose Croix Chapter and Hamilton Consistory. Floral tributes were very numerous. Services were conducted by Rev. J.A. Ballard, of St. Andrew's Anglican Church. The Masonic committal was conducted by officers of the order. 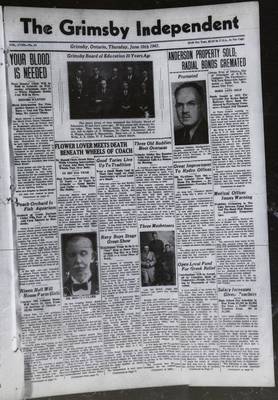