Mrs. John G. Tufford, pioneer of Clinton Township, became a centenarian on Friday last - has had the unique experience of seeing 7 generations of her family - grandfather was a teamster in War of 1812 - pallbearers were chosen because they owned plug hats.

The oldest resident of Clinton township and possibly of Lincoln County, Mrs. John G. Tufford, became a centenarian on Friday last. She was born on Feb. 19, 1843, and was showered with congratulations of her many friends and acquaintances at the home of her daughter, Miss Delpha Tufford, Vineland. Mrs. Tufford is the oldest grandchild of the late John and Elizabeth Moot. Mr. and Mrs. Moot were Dunkards and had a family of 12 children. They were one of the pioneer families of Tintern where Mr. Moot had 500 acres of land, living on the farm now operated by Roy Blain. Mrs. Tufford has the unique experience of seeing seven generations in her family. She has lived in the time of her great grandmother, her grandmother, her mother, herself, her daughters, her granddaughter, and her great granddaughter. She has two sons and two daughters, Frank Tufford, Fenwick; William Tufford, Clinton Township; Mrs. R.J. Moyer and Miss Delpha Tufford, both of Vineland. She also has 7 grandchildren and four great grandchildren. Although she has been an invalid for 26 years, suffering from arthritis, Mrs. Tufford still recalls vividly the Canada of a century ago, the trials of the early settler, and many amusing incidents of days when Canada was young. "Grandfather was a teamster in the War of 1812," Mrs. Tufford recalled. "Grandmother often told how she made a little hut in the bush and as soon as it was dark she took her feather tick and baby (that was my father) and went out there to sleep because she was afraid to sleep in the house alone." Mrs. Tufford is the last child living of a family of 12. Looking back she compared sand floors of bygone days to the polished floors of present times; cutting ice from a trough beside the house, to electric pumps of modern farms; lard lamps and candles, to electric lights; bake kettles in the fireplaces to modern stoves. "I can remember when anyone died they were laid out on a board on two salt barrels," Mrs. Tufford went. "The pall bearers would dig the grave and then come back for their supper. Uncle Adam Huntsman of Mud Creek made walnut coffins for $15. The minister and the pallbearers rode horseback with long sashes around their necks and hanging down over the horses' sides. There were six men who were very often chosen as bearers because they all had plug hats. They were Mr. Scram, Mr. Bugbee, Mr. Henry, Mr. Peter, Mr. Abram and John Moot. We never locked a door in our time, only when someone came in and told us about a robbery in Chicago or New York and then we would put a knife over the door. We didn't have to watch out for autos running over us when we went to school but we were afraid of a bull that ran wild for a while. When you got six hogs weighing 200 pounds or more killed, a barrel of sausage and sauerkraut, pickles, pancake flour and killed a beef then you expected to get through the winter all right. I remember when there was no St. Catharines; it was just a little place and there used to be a bear tied to a stump the other side of the railway tracks. When I was a little girl I went to grandfather and told him that they said a wagon was coming through the country without horses, that was the railway. He said, "You go off outdoors, you're going crazy, whoever heard of such a thing." "In my time some girls took their spinning wheels in a wagon and went around spinning for people that hired them," Mrs. Tufford recalled. "Now they spin around in a car for pleasure. Women worked hard all day for 25 cents and men were paid 50 cents for working all day in the harvest field. Paring bees, quilting and singing school used to be the amusements. Lane's Church used to be packed to the doors when we held a tea meeting. The ministers used to sing and were the entertainers. When a couple were married, the wedding would be held one day, the "infair" at the groom's house the next day, and then they would drive to St. Anns or Jordan and back for their wedding trip and be back to work on the third day. Everybody usually walked where they wanted to go. The circus men used to walk through the country leading their animals. Father sometimes walked to Niagara for groceries and he and Charles Fritzshaw to Hamilton and back in a day," she said. 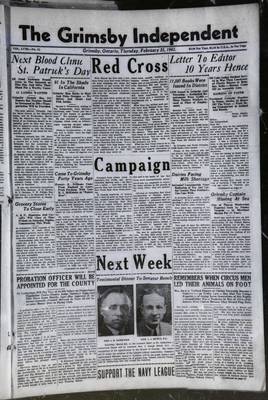