Messrs. Scott Marlatt, of Grimsby Beach, and Jacob Henry McLean, of Clinton township were the guests of Gordon Hanna, proprietor of the Hotel Grimsby at a New Year turkey dinner on Thursday evening of last week. The two gentlemen, both bachelors, are two of the district's oldest lifelong residents. The occasion was Mr. Marlatt's 88th birthday anniversary, while Mr. McLean is in his 86th year. Each living alone, they were both born at Beamsville, the sons of United Empire Loyalists.

Mr. Marlatt, a son of the late Ezekial Marlatt, was born on January 1st, 1854, and is the last surviving member of a family of 7 boys and one girl. He served at one time as a councillor in the village of Grimsby, and conducted an undertaking business here for 18 years. Prior to that time he was in the undertaking business in Beamsville for a few years. After selling his Grimsby business to a brother, James Marlatt, he was employed by the H.G.& B. Radial railway, being in its employ until it was disposed of about 10 years ago. Since that time he has lived retired at Grimsby Beach.

Mr. McLean was born on June 30, 1856, at the "Thirty" just west of Beamsville, a son of the late Dr. Hugh McLean. He now resides just opposite the house in which he was born on the No. 8 highway, where he has spent his entire life with the exception of about a year and a half when he lived in Beamsville.

Mr. Marlatt has but one sister living, who is now 82 years of age, out of a family of four boys and one girl. 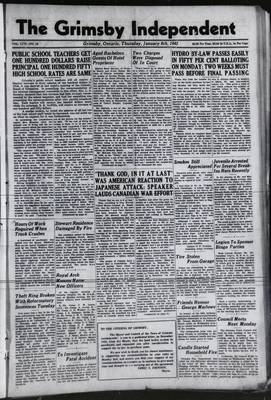